As of MoreGallery 1.3, it is possible to set up region-of-interest cropping. With this feature, the designer or developer defines the different crops that should be available and the end user then selects the right part of the image when it has been uploaded.

The crops can optionally specify the aspect ratio it should use, as well as the size of the output image.

To set up crops, you’ll update the moregallery.crops system setting. Its value is a specially crafted string containing one or more crops, separated by the pipe symbol (|).

Here’s an example of what the setting might contain:

The syntax uses a pipe symbol (|) to separate different crops. Each crop is available as an item under the image when editing its information. In the above example, we defined three different crops: small, medium and large.

For each of the crops, the definition starts off with its name, followed by a colon (:) separating it from the crop options.

The name is displayed to the user when editing an image, and also used for the placeholders with the mgGetImages snippet. 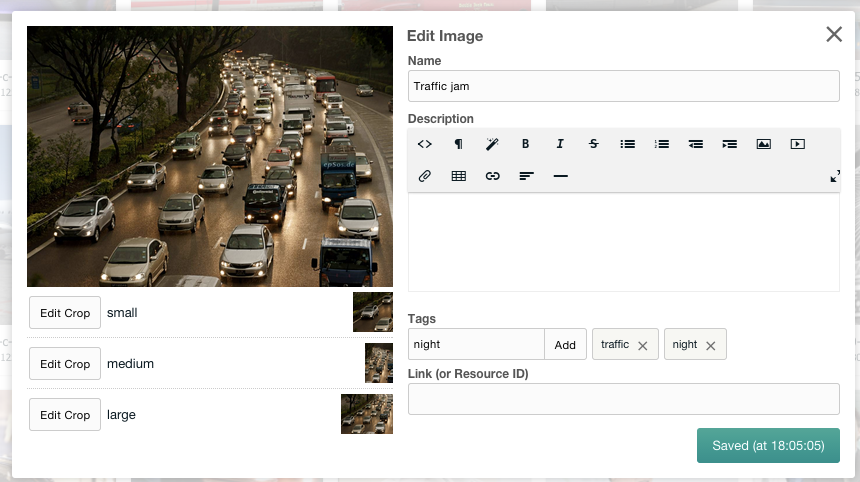 If your name needs to include special characters, or if you want to translate it into different languages, you can use lexicons for the name. Set the name to a simple string like “thumbnail”, and create a lexicon entry for “crop_name.thumbnail”. The easiest way to add this lexicon is to add it to the core or moregallery lexicon via System > Lexicons.

Options are separated by a comma (,) and are specified in the key=value format. There are currently four supported options:

The end-user does not see these settings directly, however they do see the results. Their crop selection will be restricted to the aspect ratio you define and the image will be generated at the right size determined by the width and height.

MoreGallery automatically builds cropped versions of each of the crops, for each of the images. This happens when uploading an image for the first time.

If you’ve just added a new crop to an existing configuration or changed the name of a crop, it will also generate crops for existing images. This cropping happens when listing images in the Gallery resource view, or when the image is requested in the front-end. Generating the crops for a large amount of images may take a fairly long time (around a second per image with 3 crops), and temporarily causes high resource usage on the server.

In both scenarios MoreGallery uses the defined aspect ratio and width and height to figure out how to create the crops. This way, you can be sure the configured crop is actually available when displaying the gallery.

You’ll probably want to display the crops in your front-end once they’re generated. This can be done by using some new placeholders that are available in the imageTpl and singleImageTpl chunks, in the mgGetImages snippet.

The crop placeholders follow the format: [[+crops.{CROP_NAME}.{CROP_VALUE_KEY}]] where {CROP_NAME} is the name of the crop as it was defined in the moregallery.crops system setting (for example small, medium or large in the earlier example), and {CROP_VALUE_KEY} is one of the below.

Using these placeholders, you can add your crops in the way you’d like them to appear in your imageTpl chunk! Perhaps using the picture elements, or simply to highlight different areas of an image.

The above code would result in something roughly like the image below. 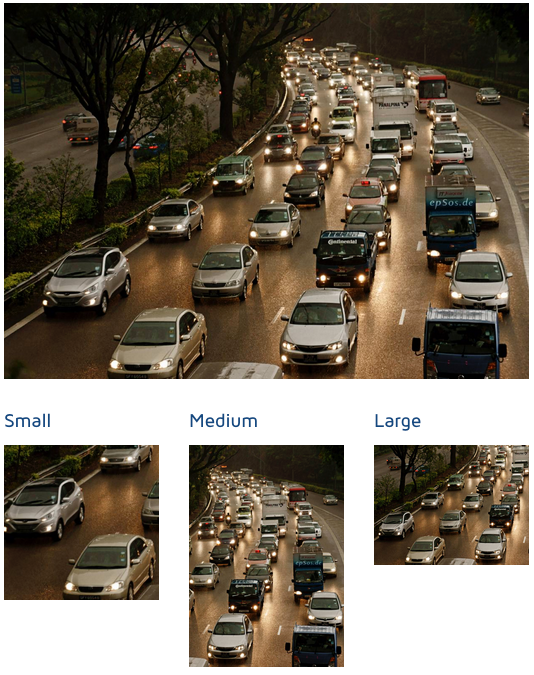 We give you the tools to go nuts with possibilities, now it’s up to you to decide how to integrate these crops into your design!

For those looking to use the picture element, this page will explain how to set up responsive images with the picture tag in more detail.

If you have any questions about crops, please don’t hesitate to get in touch with [email protected] - we would be happy to help!